Almost 9 years ago we arrived in Canada with two suitcases where we had packed the  essentials for a potential move to Canada. Two sets of lined, two sets of cutlery, two fancy plates (Mågestel) wrapped in my navy towel, two breakfast bowls wrapped in Adrian’s light blue towel. Even the towels are still in use. Neither new nor fancy but to this day they do their job well. All our new Canadian towels are in neutral colors – you always forget who is using which (yes, I have a towel thing – I like to know that it is only my butt that is being dried by my towel ;-)), however; when the navy and the light blue are in use we know which towel belongs to whom.

9 years later we have accumulated so much more stuff (too much really ;-)). A good mix of Danish and Canadian art and culture. And we have produced a fine young kid who is born as a dual citizen and now his parents have joined him as dual citizens too. September 25, 2018 Adrian and I became dual citizens – Canadian and Danish. We now belong to two queens!

I remember our arrival day in Canada like it was yesterday. We were booked on a mini-bus from Toronto to London, ON. It was the last week of November. Chilly but no snow. I saw skiing hills (bumps) on the way but besides that it was pretty boring (the trip from Toronto to London is amongst the most boring drives in Canada; maybe in the world). We arrived at a very nice hotel. Paid by Adrians new company. We went out to find dinner and saw the street closed for a parade. People were sitting on lawn chairs by the curb. The Christmas parade would be coming by shortly we were told. We waited for ½ hour while more people took their seats but we were hungry and decided to find some food. As we had eaten the parade finally started. I remember not knowing what to think – blaming it on jetlag. Firstly, it was still only November and secondly well, parades have grown on me after experiencing Canada Day 😉

The next morning we set out to explore the city – to get to know the neighborhoods and to find a place to live. We had looked on Kijiji and scribbled down some rental addresses without making appointments. We put on our fall clothes and did what we knew as Danes: With no bikes we were walking! We thought that would help us getting to know the neighborhoods and helping the jetlag to disappear. And this was the moment that almost made me now want to leave. Right there. That moment we turned the wrong way on Dundas street……. (Everyone knowing London will be smiling a knowing smile now).

People begging for money, homeless shelters and people screaming at us for no reason (or was it that obvious that we were from out of town ;-)). We walked for an hour without speaking a word only nodding at rental houses and passing by quickly shaking our heads silently agreeing that we were not going to live there.

A lot of streets in London (as in a lot of newer cities in North America) are straight as an arrow and making perfect squares with the crossing streets making us only turn twice to be heading back and as we walked parallel with Dundas walking towards Old North the houses started changing and so did our mood. I remember thinking – okay, so it is not only a crack selling town. Our mood lightened as we saw a house with a first floor rental apartment. We called and the owner was home and we absolutely loved it. We had landed our feet in Old North in London, ON (we did walk another 5-10 km looking at a few more rentals but we knew Victoria Street was our new home).

Renting a car the next day for a two hour drive to Ikea, Toronto where we bought the cheapest bed frame (which we still have), the almost smallest dinner table and the cheapest coffee table and duvets (who knew that the Danish duvet covers have a different size than the Canadians). We wanted to save our money for travelling or maybe we were scared that we would decide to move back again quickly. If I had known we would still be here 8+ years later I would have gone for the more expensive stuff – cause we are still stuck with the ugly bed frame (the dinner table is now our yard table ;-)).

We had four great years in London, ON. We left with happy memories, a beautiful son and a red Ford Escape. Next stop was Montreal. We still love living here for better and worse… This French city is as charming at it is annoying. However, the diversity is amazing and this diversity is what makes Canada great. Canada might have the most beautiful nature in the world. From beaches to mountains to waterfalls and bears this country has it all. However, the most beautiful about Canada is its people. This thanking, inviting and strong people have the biggest hearts in the world. Canada welcomes everybody who wants to live here peacefully. Canada believes in the greatness of diversity. 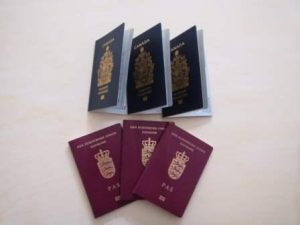 Thank you Canada for welcoming us two Danes into your midst. Thank you for giving us the opportunity to be part of a democracy again. Thank you for being great, Canada.